Well, we’re getting closer to 1.0.4, and while it’s still a few weeks away we’re going to start hitting you fast and furious with blogs aimed at explaining the upcoming changes. To kick things off, I wanted to provide an overview of some of the larger systems changes and game improvements.

The change we made back in 1.0.3 to remove the bonus monster damage per additional player was a great start, but we can clearly go a bit further. The first change we’re making in 1.0.4 for co-op is toremove averaging in multiplayer games of Magic Find and Gold Find. You’ll benefit from your full Magic Find stat, independent of other players in the game. We originally added Magic Find averaging so optimal play did not involve people stacking what we call “adventure stats” to the detriment of their party. While this may re-emerge as a problem, we think the current solution feels like too much of a penalty, and is doing more harm than good.

Along the same lines as the change in 1.0.3, we’re going to be lowering the health multiplier for monsters per additional player in co-op games. It’s going to be a flat 75% in 1.0.4 for all difficulty levels, as opposed to the scaling 75/85/95/110% it is now. This makes enemies far more manageable in co-op games, and rewards a co-ordinated group with a higher farming efficiency than playing alone. 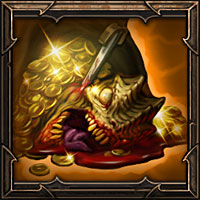 We know there are a lot of you out there that are really frustrated by the difficulty of some of the champion and rare packs, so in 1.0.4 we’re going toshrink the gap between normal monsters and Elite packs (Champions and Rares). The design intent of Champion and Rare packs is to provide a spike of challenge, but in general we feel like the gap is too big. Normal monsters die quickly and are usually just fodder, and Champions and Rares can feel like a brick wall.  In general we’re looking to bring normal enemies up a smidge, and Champions and Rares down.

So, in 1.0.4 we’re increasing the health of normal monsters by approximately 5%-10% in Inferno, but also increasing the likelihood they drop magic or rare items by a factor of four. We’re correspondinglylowering the health of Champions and Rares by 10-25% and editing specific affixes to shrink the difficulty gap. We’re still working on those numbers, but that’s approximately what we’re shooting for.

To further reduce the gap between normal and Elite monsters, we’re adjusting some of the more frustrating monster affixes, such as Fire Chains and Shielding.* Of course there are some normal monsters that are massive spikes in difficulty too, and we’ll be making polish adjustments to a few of those as well, like reducing the damage of two-handed skeletons like Skull Cleavers.

Weapon damage is the most important stat on a weapon. It can be disheartening to get a lot of weapon drops and you know before even looking at them that they have no chance of being good. To help give weapons a fighting chance, the raw damage value on all level 61 and 62 weapons will be able to roll damage that extends all the way to the top end of level 63.

We also want to close the gap between dual-wielding and two-handers, and so we’re improving two-handed melee weapons by creating a new set of stronger affixes to compensate for the loss of stats that can come from your offhand.

On the topic of two-handers, we’re also changing how damage is calculated on a few damage-over-time skills.  Many skills have text like “Deals 75% weapon damage for 5 seconds”, which isn’t exactly clear as it can be interpreted a few different ways.  It also made skill evaluation difficult, particularly for skills with long durations or cooldowns.  We’re switching a lot of these skills to read “X% weapon damageover 5 seconds”.  Many skills already follow this format, and understanding what the skill does is very clear.  As the skills are converted there is an additional opportunity: when converting to this format, choosing a value for X depends on your weapon speed.  So what we’ve done in most cases is assumed a high attack speed (at least 2.0 attacks per second), chosen a value of X, and then in many cases bumped the value even higher.  A skill that currently does 75% weapon damage for 5 seconds, with a 2.0 speed weapon, will convert to at least 750% weapon damage over 5 seconds.  The skill becomes easier to understand, is a small buff for most one-hand builds, and a big buff for two-hand builds.

Rather than focus on whether or not you can beat an enemy, many players would rather figure out how fastthey can beat them. We’re removing Enrage Timers and the “heal back to full” behavior from Champion and Rare monster packs. We don’t think they fit well into the general philosophy of the game, which is more about trying to farm as efficiently as possible. You’re already incentivized to kill things quickly, if a pack happens to take you a long time it can just feel unfair to have the pack enrage, kill you, and then heal back to full. The original intent behind Enrage Timers was to have a few encounters that served as a “DPS check” that also add tension and excitement.  Due to the randomness of Champion and Rare monsters, combined with a general philosophy of efficient farming, this was simply the wrong approach for us to take. The Enrage Timers feel more appropriate on bosses, where the setup, predictability and mechanics of the fight add the required context for the time limit.

We can’t get away from the Efficiency vs Challenge discussion without talking about death penalties. When we increased repair costs in 1.0.3 it was to make death meaningful. Efficiency is not only about how fast you kill things, but what efforts you’re putting into doing so. Dying should cut into efficiency, and that creates a meaningful challenge to stay alive in not only how you play, but the importance of how you’re designing your character. That said, we think repair costs are just a bit too high, so in 1.0.4 we’re going to be reducing repair costs of high-end items by 25%.

We have improvements coming to Legendary items, and it seems like an important enough subject to give them their own blog. Stay tuned as Senior Game Designer Andrew Chambers gives the rundown in the next week or two. As a general reminder though, existing items are not changing.  The Legendary improvements are going to be for Legendaries dropped or crafted after the 1.0.4 patch goes live.

We’re making a metric-ton of changes to classes, so we’re going to have separate blog posts for each. But in general we’re looking at unpopular skills and asking ourselves a few questions:

We hope you have fun, and stay tuned for each of the specific class articles in the next couple weeks.

These are really just a few of the topline systems changes we’ll be making in 1.0.4, and we hope you’re looking forward to them as much as we are. We’ll of course have a lot more info coming at you in the weeks ahead on Legendary items, classes and more, as well as some interviews we’ll be holding shortly before the patch goes live – which, by the way, is currently targeted for the fourth week of August.

*P.S. We’re getting rid of the Invulnerable Minions monster affix.